Nomenclature and The Unlikely Disciple: My thoughts on words, plus a book review.

Nomenclature and The Unlikely Disciple:


10-25-10
I’ve been thinking a lot about words lately.  Words have different meanings to different people.  I think this is why context is so important.  The words you use should be carefully chosen for the audience you’re addressing.
For example, if I told you to get your electrolytes and work on increasing your lactate threshold, you might raise an eyebrow.  If I suggested you use a whisker biscuit and a peep sight, you might slap me.  If I asked you to give me your testimony and explain to me the last time you witnessed to somebody, you might be further perplexed.
The first phrase I shared above is distance-running-talk for rehydrating your body and increasing your body’s ability to store glycogen.  These are terms that marathon runners would be familiar with, as they have rich meaning and help marathoners avoid hitting the infamous “wall.”
The second phrase refers to bow hunting terminology.  A whisker biscuit is a ring filled with thin “whisker” like stems that hold a carbon arrow in place and help archers maintain accuracy.  A peep sight is a small plastic cylinder inserted into a bow string.  When the shooter pulls his bow back, he peeps into this cylinder and aligns his arrow with the target.  Most bow hunters quickly recognize these as accessories to successful bow hunting.
The last set of phrases are words associated within the evangelical Christian community.  A testimony is your spiritual story, or how you came to know Christ.  Witnessing is the manner in which you actively share your faith.
So, unless you’re a distance-running, bow-hunting Christian, one of these sets of phrases may have tripped you up.  You have to have context for these words for them to have meaning.
All of this is a rather long setup for a review of a book I just finished.  It’s called, THE UNLIKELY DISCIPLE:  A Sinner’s Semester At American’s Holiest University.   My take-away of this book brings me full circle to my opening premise that words matter.  Let me explain.
In 2007, Kevin Roose was a 19-year old freshman at Brown University.  A self-proclaimed agnostic, Roose was mired in English studies at Brown in his Fall Semester.  Because he was raised in more of a Quaker setting, he had very little exposure to evangelical Christianity, and consequently knew very little about a place like Liberty University.  (If you’re not aware, Liberty University is an ultra-conservative Christian college founded by the late Jerry Falwell, the leader and founder of The Moral Majority.  Full disclosure:  I have good friends who graduated from Liberty, and many kids from my church have attended or are currently attending Liberty.  So, I know more than the average reader.  On top of that, I got my undergraduate degree in English from Cedarville University, a small college in Ohio that would not differ much from Liberty). 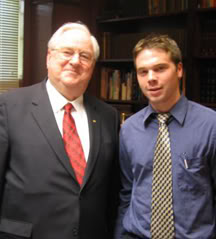 Roose decides to transfer to Liberty to discover what exactly goes on at this “…conservative, Christian utopia.” He does some strategic, verbal gymnastics during the application process and manages to sneak in as a transfer student.  There’s a presumption that Roose is a Christian, as being a Christian and agreeing to The Liberty Way (a doctrinal and lifestyle statement that all students must sign and agree to follow) are preambles to acceptance.  Roose is accepted and moves in to “Dorm 22” , a ubiquitous building name which seems to be his Stalag 17, with Roose as Hogan to Falwell’s Colonel Klink.
What follows are 300 pages of sincere undercover work.  Roose starts out to confirm his suspicion that young evangelicals “…spend their time huddled in dark rooms, organizing anti-abortion protests and plotting theocratic takeovers.”  He expects to find 25,000 students who will not defy the wishes of the benevolent televangelist, people who will fulfill Falwell’s dream of creating the next generation’s Moral Majority.
In order to maintain his covert status, Roose hilariously goes through a sort of “Christian bootcamp.”  His drill sergeant is a high school friend, Laura, who, as Rouse states, grew up in a “conservative evangelical family” and had “real Christian street cred.”
Laura introduces Roose to the world of evangelical-speak.  “Christian culture is not something you pick up,” she tells him.  “These kids are going to know you don’t belong here.”  For three days in Baltimore before his first day of school, Roose is introduced to Veggie Tales, The Left Behind Series, CS Lewis, and contemporary Christian music.  And , of course, Roose is warned that “cursing is a serious no-no in evangelical circles.”  (When Roose does slip and let a few “S” or “F” bombs out, he will learn the hard way that swearing, like so many other rules violations at Liberty, are subject to “reprimands” and monetary fines, all outlined and legislated in The Liberty Way.)
If you’re reading this and you’re a Christian, you’re probably starting to get that sinking, slipping feeling that Christians are about get another 1,000 pound anvil dropped on their head, that the Christians that Roose encounters will fulfill all the worse stereotypes.  You fear this because you know how Christians tend to be portrayed on TV sitcoms and in movies.  (True confession:  I laugh out loud at Homer Simpson’s evangelical Christian neighbor, Ned Flanders.  Why?  I’ve met that guy a million times!).
This is where the book takes a pleasant twist.  Roose is a fair-handed writer with a soft-spot for sincere people.  And one thing becomes increasingly clear to him during his four months at Liberty.  The Christians he encounters are real people.  Although Roose expected to meet holy warriors preparing for a crusade, what he encounters are roommates, dorm-mates and friends who share the same vulnerabilities he shares.  They have doubts.  They express fear.  They experience confusion.  They get drunk.  They have sexual temptation.   And yes – they transgress.  They sin.  And they experience forgiveness.
What’s so ironic about this is that Roose had never witnessed Christian vulnerability before.  He had to create a Christian façade in order to witness Christians letting their hair down.  And once he experienced the humanity of Christians, he liked them an awful lot more!  It seems that those within the Christian community are intent on building this false wall of “sinlessness” in front of non-Christian people.  But once you join the team, we’re happy to expose you to all our shortcomings, warts and all.
It got me thinking that the false front Christians often propagate is constructed with words.   If you’re a Christian, are you guilty of speaking in platitudes?  Do you toss around catch phrases like “the Lord’s will” and “I’ll pray for you” to your friends?  Do you jam scripture down the throat of a hurting friend who has no context for trite Christian-speak?  A little vulnerability and humanity might go a long way in showing genuine concern.  People outside the faith community don’t know Romans 8:28 from a lactate threshold.  Next time, offer to make that hurting friend dinner and save the buzz words for someone who cares.
I’ll not play spoiler on what happens with Kevin Roose, because I’m recommending this book and hope I’ve peaked your interest enough to read it.  What I will share is that Roose gets further entangled in Liberty lore , brokering a one-on-one, personal interview with Jerry Falwell for the student newspaper, an appointment that ends up being Falwell’s last sitting interview before his death in the spring of 2007.  Little did Dr. Falwell know his final interview was with the Unlikely Disciple, Kevin Roose.
If you’re a non-Christian and have a harsh view of Christians or Christianity, I recommend this book for its even-handed insight.  You may very likely share some of the common misperceptions that Roose did, and might be surprised to learn that Christians are flawed, yet sincere people who wish to extend peace and grace (yes, we have some funny ways of showing it at times).
If you’re a Christian, you owe it to yourself to read this book to see how the non-evangelical community views you.  And I encourage you to empathize with some of those views.  You need not compromise your values, but you may want to rethink your strategy.
As always, I'd love your feedback and comments.  Talk to you AfterWords.
Posted by Kevin Shaw at 9:23 PM 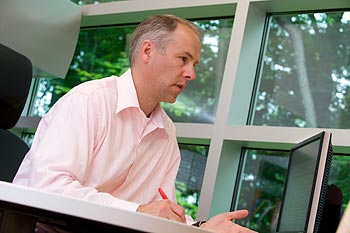 Kevin Shaw
I'm a 40-something husband and father of four who lives in Grand Ledge, MI, just outside Lansing. I have a BA in English and an MBA. I detoured on my original goal of being a journalist for practical reasons. However, this blog is an attempt to apply social media concepts to see if a critical audience can be developed via blogging, tweeting and Facebooking. Here goes...